Light House has been working in the relief and rehabilitation areas since 1988 with own resources and donors support during major floods and other disasters in Bangladesh. During flood in 2017, many parts of Light House working areas were affected and it responses the disaster in collaboration with local community as well as government counterpart to provide live saving relief and rehabilitation activities.

During flood 2017, on 23rd August and 1st September, 2017 Light House have stand beside the victims with its staffs contribution and PVH Ltd and have distributed child foods among 1100 children at Sariakandi  and Sonatola Upazila of Bogra and 298 Children at Chilmari Upazila of Kurigram on 27th August 2017.    Besides Light House provide health care services among 78 pregnant women and refer many women and children to government services center. Light House distributed ORS and essential medicines to the flood victims. 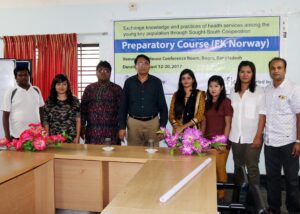 Light House has been implementing “Exchange knowledge and practices of health services among the young key population through south-South cooperation” project supported by FK Norway. It is a regional initiative where Community Support Group (CSG) from Nepal and Aye Myanmar Association from Myanmar are working together with Light House. Under this project Light House send 2 selected volunteers to participate an International youth camp in Oslo, Norway which was held from 22-25 August 2017. They represented Light House as well as the project goal and objectives in the youth forum and work with other volunteers and exchanged their knowledge and skill.

Advocacy outcome: Procedural barriers came up as major problem to bring sex workers and their children under social safety net programming.  For this, along with Department of Social Services, Light House, UNAIDS and SCI can start dialogue with the different ministries to remove the procedural barriers. But the initiative to remove procedural barriers will take time to come in a result. As part of short term plan, special project, Light House can submit to DSS-Planning wing under public private partnership which might help the sex workers and their children but initiating dialogue to remove procedural barriers needed to be considered with importance too.  The organizations who are working for human rights those can be involved through sharing the report of this advocacy and a small meeting with these organizations to involve might help. 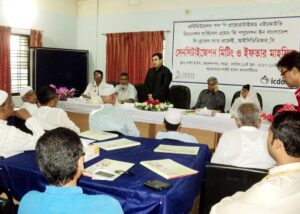 To meet its vision, Light House working to stop further spreading of HIV and prevent the concentrate epidemic among key populations as well as general population. To create awareness and increase social responsibility upon the issue, Light House conducted a Sensitization Meeting and Iftar Party at its head office, Bogra on June 06, 2017 under the project of the “Continuation of the prioritized HIV prevention services among key population in Bangladesh” supported by Global Fund Project, icddr,b. Different GO/NGO representative, LEA authorities, Lawyer, Journalist, Local elected bodies, Religious leaders participated to the meeting. The Superintendent of Police, Bogra, Mr. Md. Asaduzzaman, BPM, participated to the meeting as a prime guest. Mr. Md. Samsul Haque, Civil Surgeon and President of Bogra, Bangladesh Awami League, Mr. Alhaj Momotaj Uddin (CIP) participated to the meeting as special guest. A total of 42 participants participated to the meeting and provided significant recommendation as well as guidance to implement the HIV prevention activities successfully. The meeting was presided over by Mr. Haru-Or-Rashid, Chief Executive of Light House.